Well now, where do I begin? I’m not sure how to explain this one.

Months and months ago, maybe even years ago – I can’t remember how long – Juniordwarf started talking about ‘the butty’. Originally it sounded a bit like one of those pommie accents where they don’t quite say the ‘t’ sound, so more like ‘bu [almost silent t] – ee’. (if that makes sense! If I knew the phonetic alphabet I could spell it that way, but I don’t, so this is the best I can do).

Down the track, the butty evolved into the dutty, the ditty, the bitty [**closes eyes and tries not to think of Little Britain**], and more recently the zucky and the zitty.

We still have no idea what it is, or where it is, but when he comes into our bed in the morning, he announces he is going to the butty (or the zucky, or whatever it’s called), crawls under the covers and squirms around.

It’s very entertaining, even if the bed gets totally wrecked.

Sometimes he doesn’t go because the ‘butty is closed’ (once the dutty was closed and was in the microwave), and his visits have tapered off. A couple of times he’s said he doesn’t go there any more.

Today he did, which is the first time for a while. 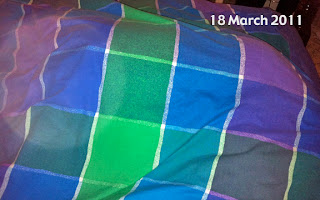 When I asked him this evening if he still went to the butty, he said ‘I still go to the dutty on Sunday, but not every day.’

So I don’t know what it’s future is. I just wanted to write down the story before it closes for good.