I was intrigued enough by the title Pretty Girl in Crimson Rose (8) when I saw this book in the library to pick it up and scan through it, because I had no idea what the title meant. 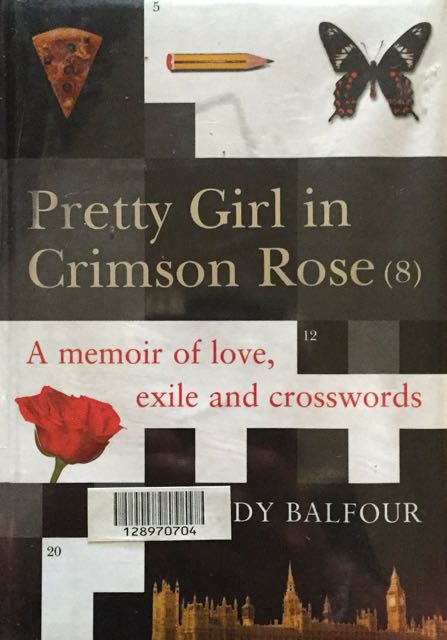 Obviously if you’re a crossword enthusiast, you would have picked up pretty easily that it’s a cryptic crossword clue, which is what this book is about.

It explores how to interpret clues and touches on the compliers of these crosswords from newspapers like the Times and the Guardian. This fascinated me. I had no idea that “setters” operated under pseudonyms and had their own styles and ways of interpreting the rules. Mr Balfour explains how, although crosswords were invented in America (by a British ex-pat, which a previous reader of the library’s copy of the book has gone to great pains to point out on page 103), they were refined by the British to the extent that they are seen as something quintessentially British.

Throughout the book Mr Balfour uses clues to illustrate the points he’s making – some which he talks through in the text, and others which he leaves for the reader to solve. He also reproduces a puzzle from the Guardian (number 22445), which was about him, set by legendary Guardian setter (the late) Araucaria using words provided by Mr Balfour, for his 40th birthday. That’s a pretty cool gift!

(I love this. Araucaria’s pseudonym was taken from the monkey-puzzle tree (botanical name Araucaria), which is also known as the Chile Pine, anagram of Cinephile, which relates to his love of film, and is the pseudonym under which he set crosswords for the Financial Times.)

All this without even touching on the varied and interesting experiences Mr Balfour has had since he and his girlfriend left South Africa, which would have been great reading even without the crossword references.

I loved how this book was put together, and about half way though I knew that this would be my next 30-days challenge. I have about a week to go with 30 days of yoga, but I’ve just today completed my drawing lessons from You Can Draw in 30 Days – it’s only taken four months! So much as I love my 10-15 minutes drawing each morning, I’m going to replace it with learning to do cryptic crosswords.

I’ve tried this in the past, and I have a basic understanding of some of the clue types, so my challenge is to learn more. I’m not confident enough to attempt anything like the Guardian crosswords, but I have a couple of books designed for beginners, so I’m going to get them out and see how it goes.

By the way – can you work out what the clue in the title of the book is? (I couldn’t.)

what to do with the photos