When Juniordwarf was younger, Slabs used to be at home with him on Mondays. And as long as we’ve lived here, Monday was garbage collection day. So it used to be a bit of a ritual, as I imagine it is for many little kids, to watch the garbage truck out the window each Monday morning (actually, I think it was the recycling truck, the garbage truck came later in the day).

After he got a new job, Slabs had to work on Mondays, and said one of the things he missed was watching the truck in the mornings with Juniordwarf.

Well two weeks ago, Slabs was putting out the garbage and the recycling on Sunday night as normal, and the girl who lives next door said that garbage day had changed to Tuesday. Apparently there had been a notice in the local paper, but we hadn’t got the paper that week. The council website hadn’t been updated and their after hours number knew nothing about it either, but since no one else in the street had put their garbage out, we had no reason to disbelieve our neighbour (unless the whole street was conspiring against us!).

The good thing about this is that Juniordwarf is home on Tuesdays, so he gets to watch the trucks again. 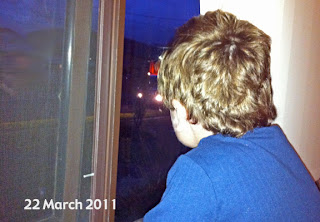