Skip to content
When we were kids, Lil Sis was recognised as the artist and I was the writer.
I don’t know if this was a deliberate thing on the part of our parents, or if it just turned out that way. It seemed like her artworks were always on display in our house and any ungainly attempt on my part to produce a drawing or painting was rather quickly dismissed. (Or at least, that’s how I remember it . . .)
Now the funny thing here is, I was going to quote a couple of my Grade 7 reports from art class to demonstrate my lack of skill in this area. However, having just referred back to them after many many years of them sitting in a shoe box, I was extremely surprised – nay stunned – by comments like this:

This is quite the opposite of what I expected these reports to say, and I certainly can’t remember producing any work that demonstrated any of this so-called talent.
I was expecting words similar to my Phys Ed reports, which said things like ‘works to the best of her ability’ (this one came up more than once), ‘continues to apply herself well’, ‘gives her best performance’ and so on. Reading between the lines (as if you had to!), all of these comments are nicely summed up by this one, which appeared one year: ‘skills are still quite limited’.
Possibly the only subject I was less competent in was typing.
Anyway, Mrs Art Teacher’s comments obviously didn’t mean a lot to me at the time. They certainly didn’t sink in or I’d have remembered them, and I was convinced that art and me were not a good mix. I was a writer after all, not an artist, and as a result, I never studied Art at school after the compulsory Grade 7 class.
Meanwhile my writing was encouraged, to the extent that my mother organised for me to spend my Grade 8 summer holidays with our local paper, because I said I wanted to be a journalist.
I don’t remember a lot about that summer, only that there was a lot of time spend hanging around the office, and that I was really excited to get my first (and to date only) by-line at the age of 14.
One week they were looking for space fillers, so I wrote an anonymous letter to the editor that I knew would stir my mother up. It was published and she was so annoyed that she wrote right back not knowing, until after her letter had been published the next week, that I’d written the original diatribe. Everyone at the paper got a giggle out of that one.
Anyway I grew up knowing that my father could draw, my grandmother (on my mother’s side) could draw and my sister could draw, but that I couldn’t.
Instead, I wrote, but as I went through high school and university even my creative writing petered out, in favour of essays about books we’d read in English class, reports on the history of computers through the ages, the life of Katharine Hepburn, assignments on the meaning of life, morals and Nietzsche’s theories . . . and the list goes on.
I didn’t end up as a journalist, or even a sports scientist, which became my obsession in Grade 12. Instead I joined the public service, thereby fulfilling my mother’s prophesy in response to my claim in Grade 10 that I really wanted to be a mechanic. She said I’d be much more likely to end up as a bureaucrat pushing papers on a desk somewhere.
Oh how right she was!
So here are some of those papers. 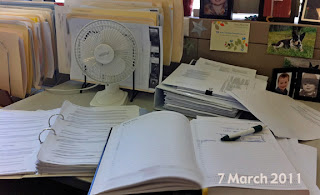