Today we completed our tour of wineries we hadn’t been to by visiting Kinvarra Estate Wines just outside the small town of Plenty, in the Derwent Valley. 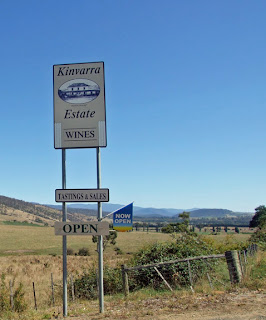 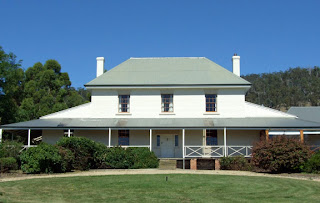 The vineyard has a great view up the Valley. Someone forgot their polarising filter. Again. The middle of the day is not a good time to be taking photos, as will become more apparent later on. 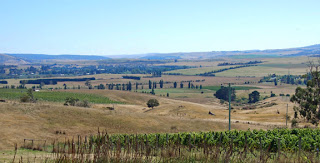 And what would a cellar door be without a wine dog? Meet Bundy. 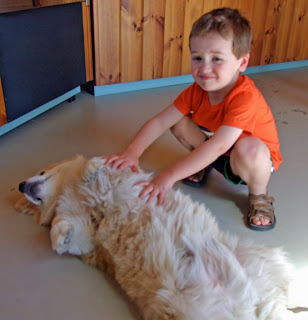 The Sunday Tasmanian guide (which I quoted yesterday) says:

Sue and David Bevan’s 10ha vineyard with a new cellar door and some simply wonderful old reislings this weekend, wines that show the variety in all its mature, honeyed glory plus a cracker of a mature pinot noir at prices which make it well worth the travel.

As I said yesterday, I’m not a wine expert. But I was quite amazed by the different rieslings. The 2001 was, as the review says, like honey. It’s something I’ve never tasted in a wine before, and it wasn’t at all unpleasant. The Late Harvest Riesling was also a pleasant surprise. I’m not a sweet wine lover, and I tend to run in the opposite direction whenever I see the words ‘late harvest’ on a label, as these tend to have high levels of residual sugar. But this one had only 10 grams, and it was very dry, for a sweet wine. I would definitely have it again.

I’m also not a Pinot drinker, but this one was nothing like any Pinot I’d had before, and both Slabs and I agreed it was pretty good.

And a big shout out to Slow Food Hobart, whose bus tour of the Derwent Valley Wineries arrived just as we were leaving. It sounds like they had a great day, and they ended up at Two Metre Tall for lunch.

We went to the Salmon Ponds, which is one of Juniordwarf’s favourite spots to visit. 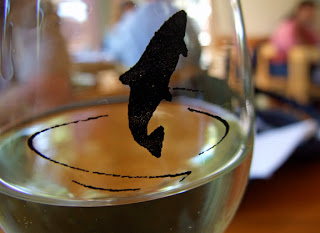 After lunch, which included a glass of one of a wine I bought yesterday (so how could I say no – I had to make sure I didn’t regret buying it!!), Sauvignon Blanc from Laurel Bank (check out that wine glass!), we went and fed the fish.

There are six ponds with fish including rainbow trout (the most entertaining to feed), brown trout, brook trout, albino trout and salmon. I can’t remember the sixth one, sorry! And what you do is buy a container full of fish pellets and throw them into the ponds for the fish to eat. Juniordwarf loves it, now that he’s finally got the hang of throwing a few pellets at a time into the pond, rather than dumping them on the bank. 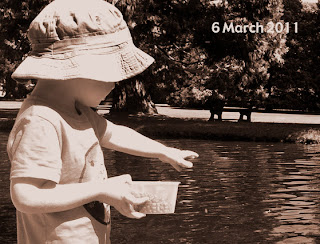 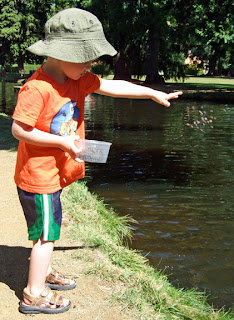 After you’ve looked at the fish, there are a couple of other things you can do.

We went for a walk along the ‘River Walk’ along side the Plenty River. It is a beautiful spot and apparently sometimes you can see platypus in there. I don’t think we ever have. Sometimes you can spot fish in there too. 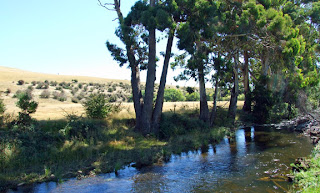 Along the River Walk there is an old fishing shack, called ‘The Sanctuary’. According to the sign nearby, it was built in 1947 by Mr William Burrows, Commissioner of the Salmon and Freshwater Fisheries Commission (as it used to be known). The hut is built from packing crates used to bring car chassis over from the mainland. Inside is a display of what the hut might have looked like when it was in use. 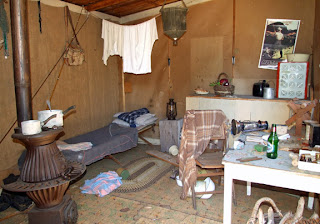 Somehow, I think the Cascade stubby is a little incongruous. Juniordwarf is quite fascinated by the hut’s outside toilet.

As well as the River Walk, there is the Museum of Trout Fishing, which is an old cottage (built for the first superintendent of the Salmon Ponds in 1865) containing rooms full of fishing memorabilia, including old rods and reels, big fish like this one: 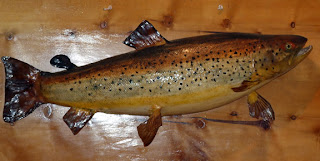 and other stuff, including rooms set up like they might have been in the 19th century. One of the interesting things in there is one of the original packing boxes used to carry salmon eggs from England to Tasmania in 1864. 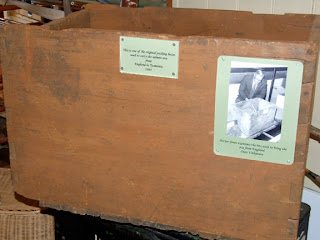 A small history lesson on the carriage of trout and salmon eggs to Tasmania from England. This information is copied from the signs posted around the hatchery at the Salmon Ponds, and I find it quite fascinating.

The first time they tried to do it, in 1852, they kept the eggs in a tub on a bed of gravel and added fresh water daily. Warm weather and a delayed departure meant that the eggs hatched only a month into the journey and all the fish died.

In 1860 they tried again, this time using ice to cool the water and delay the eggs from hatching. They also rigged up a suspension device for the trough to counter the ship’s movement. Unfortunately the ice supply ran out after 59 days, and again, the eggs all died.

There was another unsuccessful attempt in 1862, but they had also packed a box of eggs in moss in the ice trough, and these survived longer than the others.

In 1864, based on the results of the 1862 attempt and some further experiments, trout and salmon eggs were packed in ‘small perforated boxes between layers of moss, charcol and crushed ice and placed in the ship’s ice house’, which remained closed for the whole journey. Many of them survived the journey to Melbourne. Some were left in Victoria, but most were taken to Tasmania and transported to the Salmon Ponds via Hobart.

91 days after leaving London, the first eggs were put into the water, and on 4 May 1864 the very first trout to swim in the Southern Hemisphere hatched. The first salmon hatched the next day.

So there you have it. It took 12 years to work out how to transport fish eggs from England to Australia.
And there ends the lecture for the day. See you tomorrow.
Share this