Skip to content
A while ago, when it became apparent that Juniordwarf was left-handed, I bought some left-handed scissors for him, but he was never interested in cutting anything. Even when he had the opportunity at play group, he never made any attempt to use scissors.
Now that they are doing cutting at school, he’s been coming home and trying out the scissors. Specifically my fancy-edged scrapbooking scisssors. So I said I’d get him the left-handed ones so he could practise at home.
Of course I couldn’t find them. So when I dropped him off at school today, I told him I’d buy him some another pair today, which I managed to do in my tiny window of a lunch break.
When we got home, the first thing he wanted to do was cutting, so I got out the new scissors and told him they were to use with his left hand.
No, he said, my right hand. Because I think that’s how they’re learning in school. (He also seems to be learning to write with his right hand, which looks so weird because I’ve only ever seen him pick up a pen with his left hand. I assume this is because he’s copying what the teacher does and not because of any forcing on their part to change his handedness. I need to check this out. I can’t imagine that system is still around though.)
I showed him how to use the left-handed scissors and he was quite happy with that. He said he’d use these ones at home and the right-handed ones at school.
What a great idea! As a lefty said to me it’s always handy for a left-hander (if indeed he is) to be able to use right-handed scissors, as scissors for lefties aren’t always around when you need them.
So, that matter decided, he settled down for an afternoon of cutting. 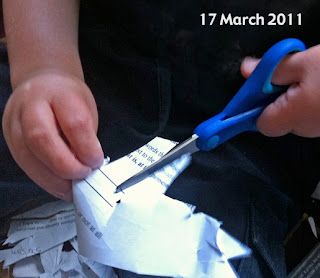 Each time he finished cutting something out he went off to take the scrap paper to the recycling box.
Wonderful!
I’ve been amazed at how much he’s learned in only a month at school – well 13 days to be exact. He’s picking out letters in books. He’s trying to hold a pencil properly, he’s cutting, he’s (apparently) eating fruit. He’s so chatty now too. All of this is stuff I’ve been trying to encourage him to do at home, but he’s never been interested.
Yet it’s only taken 13 days in school and he has come on in leaps and bounds.
Initially I had feelings of inadequacy. That I didn’t try hard enough to ‘teach’ him stuff and that I should have. That I missed all these opportunities as he was growing to shape his brain – after all they keep telling us that the early years are critical for kids’ development and if they miss out on stuff during those years there are bits that just won’t develop.
And a few years ago I might have been beating myself up about this, comparing him to other kids who can already read stuff and write a bit and blaming myself for not getting him to that same level.
But . . .
I know that it’s not my ‘job’ to educate him. I don’t have to ‘teach’ him. That’s the job of his teachers. Sure I have to help him, encourage him and give him opportunities at home to do what he’s learned at school, but I’m not a teacher. I have very little idea of how children learn nor of the best way to present things to them so they’ll learn.
My job is to be his mum.
That’s probably the hardest job of all, which is why I didn’t say ‘just’ be his mum.
My job is to love him unconditionally, to show him the world, to model the sort of person I hope he’ll become, to be there for him when he’s sad, to listen when he wants to talk, to be quiet when he wants to be quiet. My job is to help him learn respect for himself and for others and how to be a good person.
As he grows up, that job will get harder, the issues he faces will get more complicated, and there will continue to be days when I feel completely out of my depth. I’ll have to help him get ready to make his own way in the world – to continue that process of letting go, which has already started by him starting school last month.
So I refuse to feel inadequate for not having taught him any ‘school stuff’. Instead, I’m going to share in the joy and excitement and interest he has in learning all these new things at school – because there will only ever be one time he learns any of this stuff. I am going to take an interest in what he’s doing, to be happy for him when he masters a new skill and encourage him to use it.
Above all I am going to be his mum, and I am going to love him just because he’s my little boy.
Share this