My training for the Point to Pinnacle has basically been non-existent for the last three weeks. I have really struggled to get out of bed in the mornings and I’ve been lucky if I’ve managed more than one walk a week.

This is Not Good when the event is on IN TWO WEEKS!

I can blame going on holidays and not being able to get back into the habit of walking, but I walked every day of the holidays. I don’t know what has caused my reluctance to walk, because I usually have no problem at all, but whatever it is, it’s my responsibility to fix it. If I don’t make it to the top of the mountain because I didn’t train enough it’s entirely my fault.

Anyway, what’s done is done and I can’t get those three weeks back, so I have to make the most of the two weeks I have left and strike a balance between getting some km in and not overdoing it so I’m not exhausted on event day.

If you’ve been following the story so far, you’ll know that I walked to the Mount Nelson Signal Station on the Truganini Track way back in August. Today I decided to go there again but this time to take the road. After all, I’ll be walking up a road in the Point to Pinnacle so it made sense to walk up a smaller mountain in similar conditions. Okay, at 352 metres, it’s nowhere near as high as the 1270 metres I’ll be walking up IN TWO WEEKS. But it’s better than no hill.

To get to Mount Nelson, you need to find Nelson Road, which turns off Sandy Bay Road and dog legs across Churchill Avenue. I decided to take it easy, so I took my camera with me and walked the scenic route along Churchill Avenue. It took me about an hour and a half, with a few photo stops, to walk the almost 8 km to the Nelson Road turn off.

Nelson Road is known for its bends, and I had no idea how far it was to the top or how long it would take. When you get to Bend 3, there’s access to a footpath that shortcuts up to Bend 7. While that would have been a whole lot quicker, and most likely safer too, since there was very little in the way of footpath on the road, the point was to have as long a walk as possible, so that would have been cheating, I think. 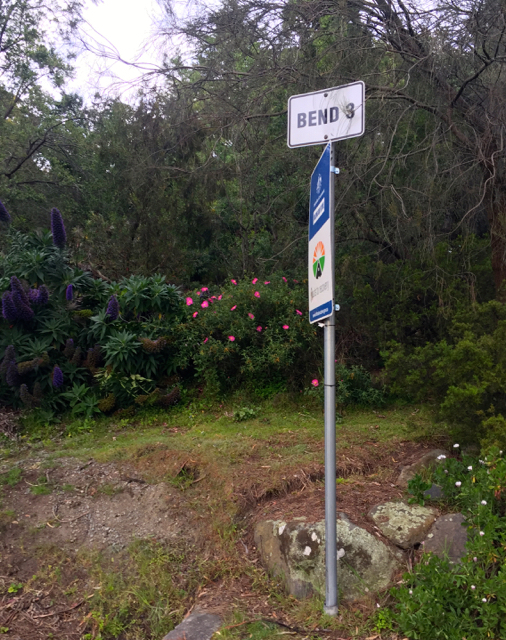 The road it was. It was a nice walk with lots of lovely houses to look at, though most of them were hidden behind trees. I was overtaken by a couple of cyclists also on the way up, some dog walkers on the way down and mercifully few cars. This was a lot more civilised than the 70km/h road to Fern Tree.

I wasn’t sure how many bends there were. I thought it was eight, and the distance between them seemed to increase between each bend. At Bend 7 is the Bend 7 Reservoir, which is fenced off and accessible to “Authorised personnel only”.

That’s not me, so I kept going. I’m not sure if there is a Bend 8, but eventually, I made it to the top of Nelson Road, where it joins Olinda Grove. That was almost four km from the Churchill Avenue turn off and it took me a bit under 50 minutes. After that, I wasn’t sure how to get to the Signal Station. There was one sign pointing me in the direction that Nelson Road continued, so on I went.

The further I went, the more it started to feel like I was in the middle of the country. I had no idea where I was going or if I’d missed a turn to the Signal Station. I felt like I’d been walking forever. I could have checked a map but figured I wasn’t exactly going to get lost, and that the road would have to end-somewhere-eventually. And it did, a bit more than two km along the road. 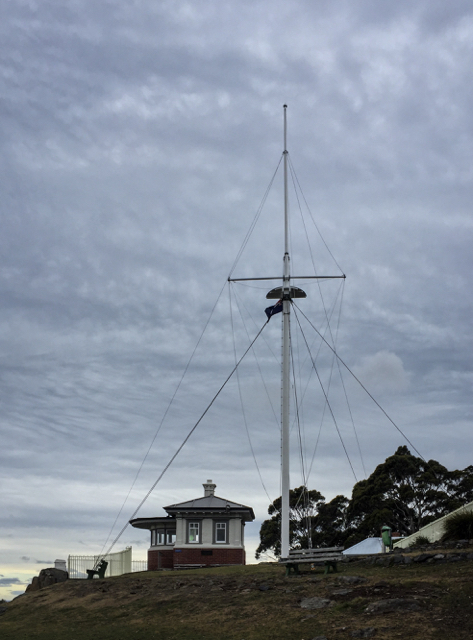 According to Discover Tasmania

The signal station was built in 1811 and was the first of a chain of signal stations that once linked Hobart Town with Port Arthur. A short message from Hobart to Port Arthur and return reply could be completed in approximately fifteen minutes – under clear conditions.

The closure of the station on Mount Nelson came with the arrival of the telegraph in 1880.

There are great panoramic views of Hobart and the Derwent from here and one thing I really noticed was how much the Grand Chancellor stands out in the city. I had some fun taking photos of the Signal Station and eventually decided I could go no longer without coffee. Fortunately, there’s a coffee shop.

There’s a track leading down from one of the lookout points that takes you to Sandy Bay, so I thought it would be fun to see where that went. It leads through Bicentennial Park, which is described as

A downhill walk, the first half of which is through open forest with views of the city, whilst the second half is amongst wetter forest.

From the historic Mt Nelson Signal Station the track descends gently downhill as it winds pleasantly through open forest. This section of track receives good sun making it an ideal choice for a winter walk. Dogs on lead are permitted as far as the Enterprise Road junction.

The track grade then becomes steeper and the forest increasingly shady and damp. After crossing Lambert Rivulet the creek is followed downstream to Lambert Avenue.

It was an interesting walk because, although I knew I wasn’t very far from civilisation, it felt very deserted. Especially when I got to the point where the track forked into two and the signpost had been knocked over and there was only an arrow pointing in one direction.

I could see Mt Wellington on my left and kept freaking out that I was going to be walking up there IN TWO WEEKS. Whilever the track was still formed, I felt relatively secure that I was still going the right way, even though there were times I felt like I should be dropping breadcrumbs. There were lots of stony steps but absolutely no indication of where I was. The backs of houses came into view, which left me none the wiser.

Eventually, I got to a sign that mentioned the contribution of Dr DJ Walters in the development of Lambert Park and, not much further on, I emerged at Churchill Avenue, just a short distance from the Nelson Road turnoff I’d taken earlier in the morning. I didn’t track that section of the walk so I have no idea how long it took or how far it was but based on the metadata on my photos, I reckon it took me about an hour.

So, that was a great Sunday morning adventure and probably the last big walk I’ll do before the Point to Pinnacle, which is IN TWO WEEKS. I know I have let myself down over the last three weeks and I’m not happy about that, but I also know I’m not going to get super-fit within the next two weeks. I’m going to stay as active as I can and give it my very best shot.

hobart from a high place