Skip to content
Today Juniordwarf’s kinder class participated in its first school assembly.
Parents were welcome to attend, so there was no way I was going to miss this. Last night there was a wine and cheese evening at the school to welcome new kinder parents and give us a chance to ask all the stupid questions we wanted to ask in a very relaxed atmosphere – although I have to say it was a little bit weird drinking wine in my child’s classroom!
Anyway, last night we were encouraged to go to the assembly, so I had a little chuckle when I arrived today and most of the mums I met last night were already sitting in a little group at the back of the hall. It felt like we were all in a little club.
We weren’t sure exactly what our kids were going to be doing, but we couldn’t wait to see their performance.
It was great to see them all file into the hall and sit down in their allocated spot. My thoughts went back to a bus trip a couple of months ago where all the kids were pushing their way onto the bus, trying to get on as quickly as possible. I remember one of the staff members saying to give them about six weeks at school and they’d be lining up quietly, waiting their turn to get on.
She proved to be spot on.
When it was the kinder kids’ turn to go on, they all made their way up onto the stage, which was tiered, so there were two rows of kids. One of the girls started off the show by saying that they wanted to show some of their work.
Then another girl introduced the parrot pictures and, with a little prompting, all the kids who had bought their parrot pictures held them up. One of the others introduced the pirate pictures, and the kids who had brought pirate pictures held them up. Juniordwarf had his pirate picture.
At the end they all held their pictures up and everyone applauded.
It was really cool!
Then a surprise! When they gave out the awards a bit later on, I was so pleased that Juniordwarf got an award for ‘trying so hard to hold his pencils and scissors properly’. A lovely reward for all the hard work he’s been putting in at home practising his cutting and his writing.
When we got home tonight, Juniordwarf started replaying some of what he had done at school today. Friday is music day, so I got a blow by blow report on how music class panned out. He takes the role of Mrs J, the music teacher, and gives the instructions and plays the keyboard. (My favourite is his version of ‘tip toe music’.)
Once he’d done that, he drew the tiers on the stage on his chalkboard. ‘These are Mrs J’s special steps,’ he said. 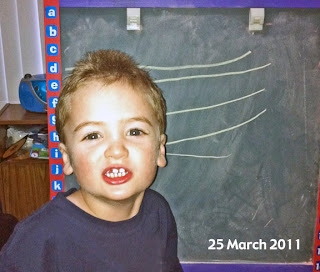 Then he replayed the kinder class’s presentation.
‘Here are some of our parrots.’
‘Here are our pirates.’
It was just great to see him enjoying reliving the moment.
Oh and he had his hair cut this afternoon (school photos next week) – he wanted it spiked up, so that’s what he got.

(And aren’t phone photos with the flash just appalling. Someone needs to learn how to use Photoshop properly to fix this kind of thing!)